Ups and downs, I would say. This is not a fast paced place, so we decided to start working on the repairs fully ourselves. But just as we got the work going we were told by the police that we were generating too much dust and polluting the sea so we had to stop. (Actually I have been told off by the police twice today, the first time was when I went into town to get cash from a cash machine without wearing a t-shirt…)

So we went over to the local shipyard, which is a real garbage dump, and negotiated a place to work with some people there. There was a bit of a language barrier, but with a bit of French we were able to communicate, and now we have a working spot.

So we transported the rudder and tools over to the yard: 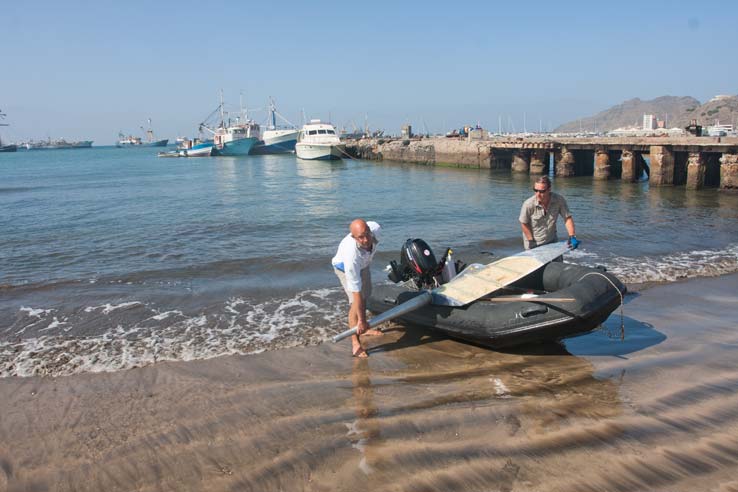 The people who let us use their yard and a bit of electricity are the local fiber glass workshop. Some suggested that I should let them do the work, but agfter having scouted out the workshop and some samples this did not really seem like such a good idea. 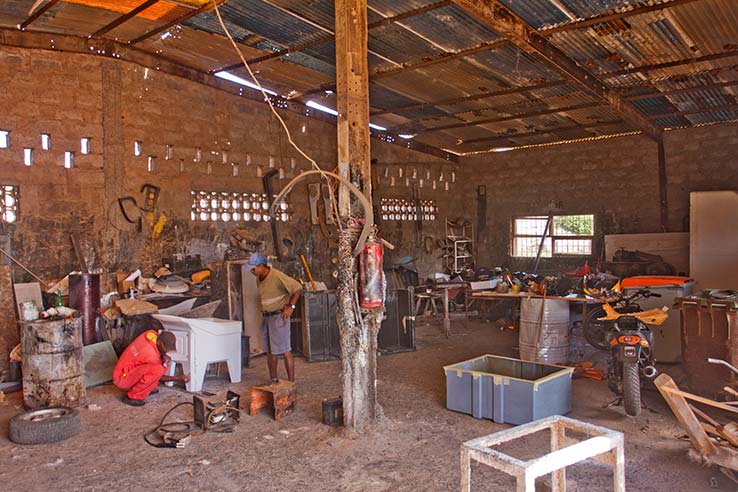 So this is now our little spot in life. At least we can add “Shipyard worker on Cabo Verde” to our CVs! AS you can see below we had to remove all the old foam since it had been penetrated by water. But we have found new foam. The biggest problem seems to be anti-fouling, since an aluminum boat needs compatible paint, and this seems to be unavailable here. 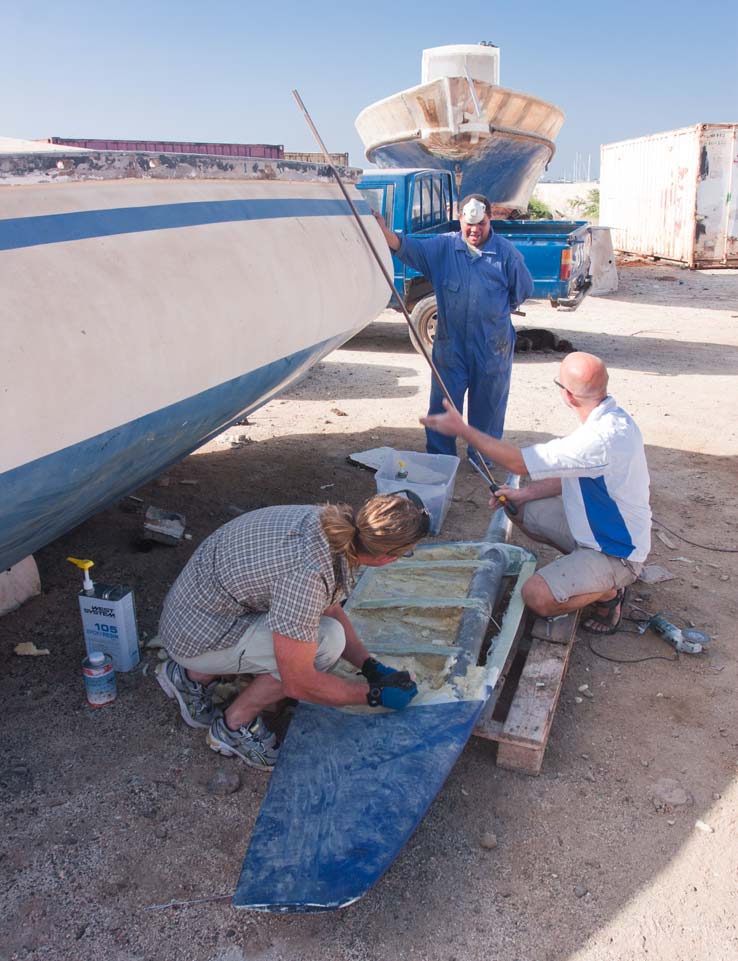 Standard thing to do before launch: Painting anti-fouling.

Well.. actually not for me, since my last small boat had so many layers of paint on the bottom when I bought it that I just grinded some old off each spring, instead of putting new on. And the large yacht I had before that was repainted on Trinidad. God knows what paint  they used, but it lasted forever and didn’t need any cleaning or repainting. Must have been horribly poisonous. Now we are using legal and nice paint.

Tomorrow night we are going to try mounting the keel. Don’t miss that! 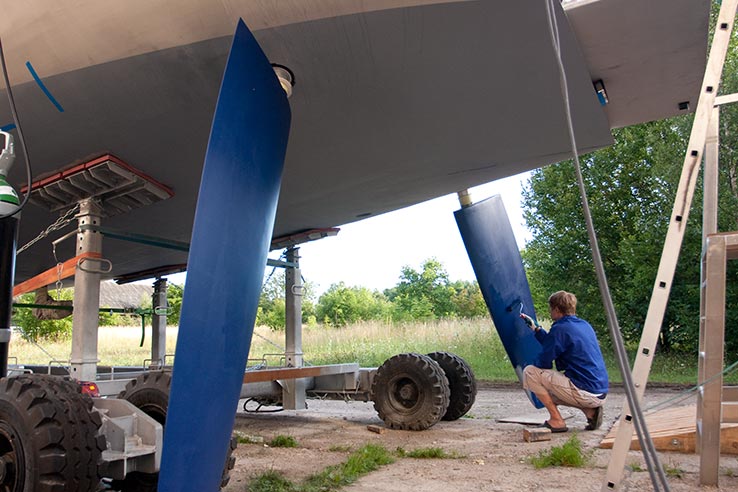 Rudders are in. They fit nicely… almost. Some small mod may be needed due to the bottom shape being a bit deformed. As you can see the team ended up building a ramp instead of digging a hole for the rudder mounting. 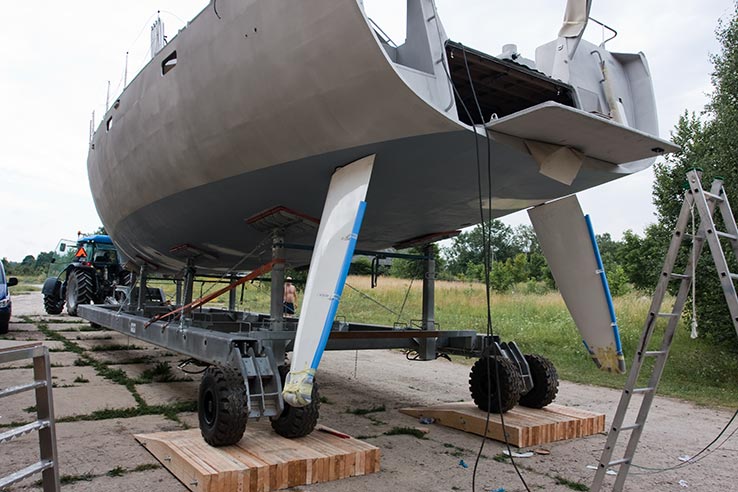 The first interior module has also been fixed in place, the famous galley sink. The picture below also shows a lot of the now completed water piping system, which is fully 100% plastic, without any brass valves or other bad metal parts. 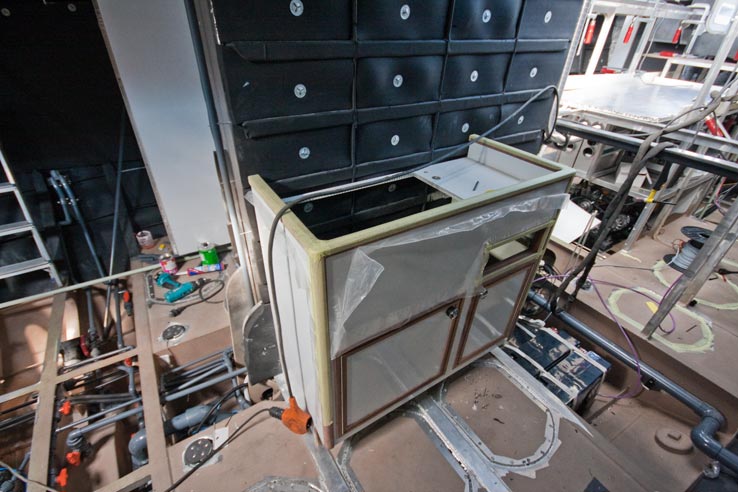