Weather forecasts. Love them or hate them. We sat in A Coruña for 3 days waiting for a low to pass, and then all forecasts from the three different institutes that I use showed a nice 30 hour window for reaching down Portugal. We knew we would have upwind coming around Finisterre, but that should only be 8 hours or so. The forecasts had wind strength between 10-15 knots, comfortable for a couple of upwind legs. The reality? 10-50 knots. Average 30. A never ending train of squalls that forced us to carry less sails for about 40 knots, which made the 10 knot moments very slow. One of the 50 knot squalls decided to have even more fun by throwing in some hail. So all in all it took us 15 hours before we could bear off to the south.

Of course I was at the helm during the hail-storm. Painful! I hadn’t really geared up properly at the start, but as time went by I switched over to all the heavy foul weather gear I’ve got. Including face mask and dry-suit gloves. Plus it was time to ditch my beloved 12 year old boots that have carried me for so long, like 30 000 Nm. Fortunately I knew they were dying, so I bought a new pair when we were in England. But dressed like this I was quite comfortable at the helm, which was good because I was at it for over 24 hours with only a couple of shorter breaks. 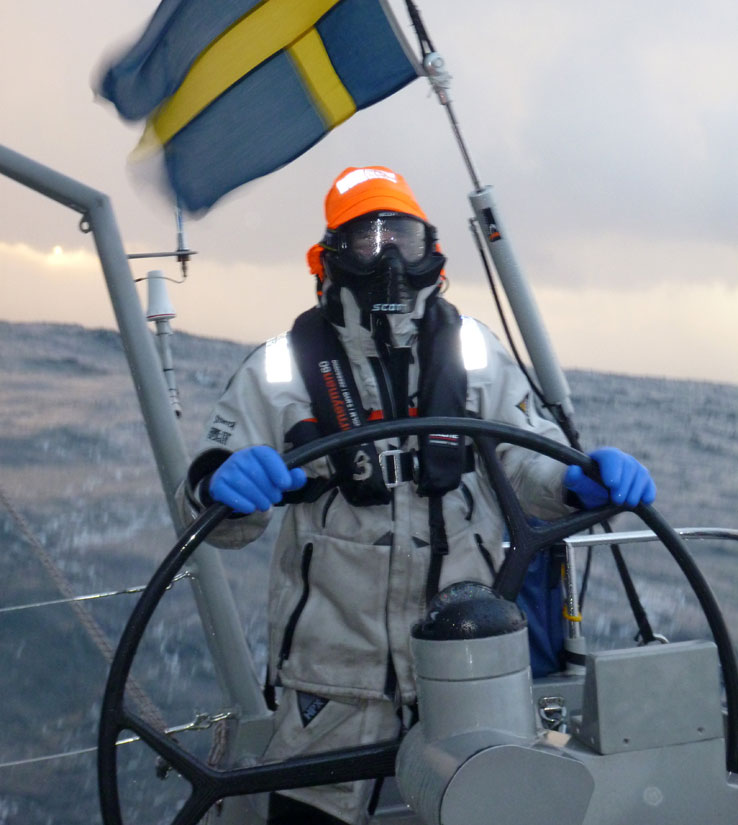 The first collateral damage during this ride was the bottom plate in the microwave oven. No big deal. The second damage was a bit bigger: We came about, and as we settled on the new tack all the instruments were dead. I was able to get parts of the system working again pretty quickly, but I still need to figure out what the problem is with the rest.

After we got round the Cabo Finisterre point we had a rather nice night, did about 10 knots and had some nice “light torpedo” show (dolphins swimming at night in “sea sparkle”, a bioluminescent algae that gives the dolphins beautiful trails of light in the water).

And would the nice westerly wind that was forecast to last all through the day actually do that? Of course not. At about noon the wind simply disappeared. Time to go motoring then. I knew one of our fuel tanks was close to empty, so it was no surprise when the engine started to protest after a while. I switched over to the next full tank. Upon which the engine promptly died in a big puff of white smoke. Some investigation showed the new tank had a bit of condensation water in it. In fact it had enough condensation water in it to fill my water separator tank 14 (!) times. So in effect we had been feeding the engine pure water. Bad idea. So we bounced around in the waves for a while, going through the empty-separator-water-tank, bleed-fuel lines, pump-out-new-fuel cycle over and over again. If I had known it would be 14 times I wouldn’t have bothered to do all those steps every time…

When the fuel lines finally were cleared of water, it would still take a while to get the engine going, since presumably the pump and injection unit also was full of water. I didn’t want to burn out my starting engine either, so I ran it for 30 seconds, waited 10 minutes, and then did it again. Finally the engine sputtered to life. Phew.

During this long time we did actually get some wind again, which prompted the first trial of “How to raise the sails at sea without using the engine”. That worked pretty well actually, even if we were just two people doing it.

So we decided to go to Figueira da Foz. When I read about this port there had been some advice about the entrance being really difficult to negotiate. I looked at my chart, and at first I couldn’t really understand why. But as we approached I realized… Look at the picture below, and think about how the 3-4 meter swell from the Atlantic (which is 3000 meters deep a short distance out from the coast) will behave as the depth starts to decrease gradually to 5 meters as it does here. We’re talking gigantic breaking waves absolutely racing in through the opening. Luckily I had realized this before it was too late, and raised our keel well outside, instead of after the breakwater as I usually do (I prefer to run the keel machinery in calm waters, as this puts a lot less load on it). Also luckily, I put the engine into full throttle a bit before the first wave took us. In situations like these, you don’t have the option to go carefully. Careful means no control. Speed means at least a bit of control and manoeuvrability. As you can see from our GPS track we still got WAY too close to the north breakwater before I could bring the boat into the right part of the channel. We never hit, but I think the margin must have been less than 10 cm at one point. I did see “1.9m” on the depth display, but we were surfing so fast at that point that I never had time to get scared before we were through. That was another (really big) phew.

3 Responses to “Biscay tries to get the last word, almost succeeds.”