We are still shooting for departure from Stockholm around September 15. Lots of work still to do on the boat, but things are looking OK so far. Today we did Man Overboard exercises with the crew that will join from Canary Islands to Capetown. There are several kids in this team, so we have done a extensive safety training program which has been very fruitful. 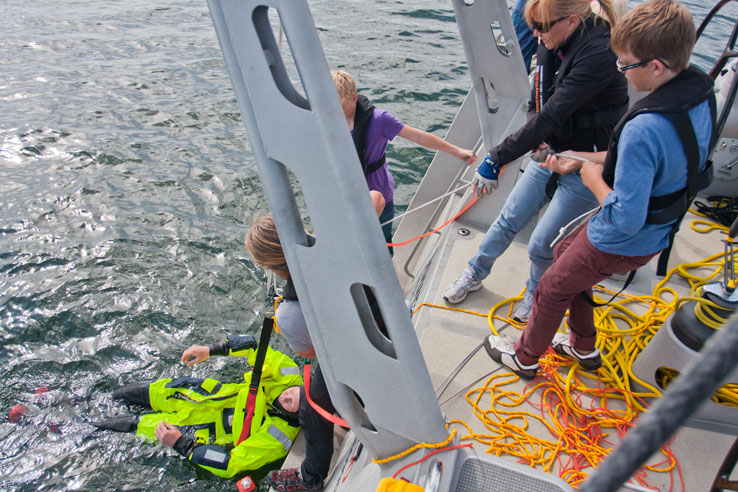 Things are moving along nicely. The salon interior has just been finished and work has moved on to the forward bathrooms.

There is comfortable seating space for 9-10 people with this layout. I have also implemented the bar, as you can see in the upper right corner. 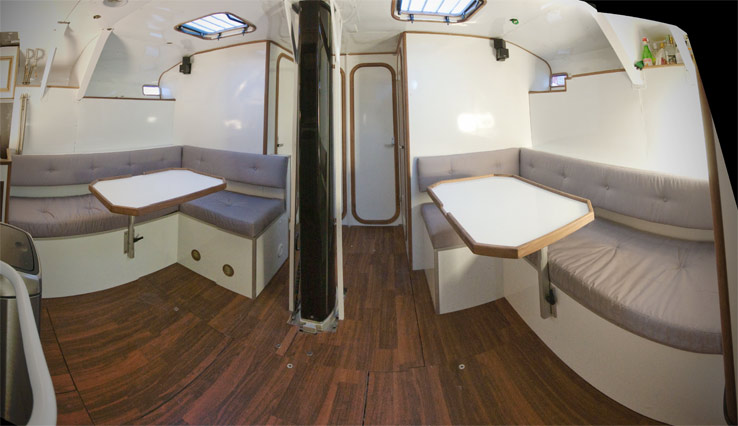 (This is an extreme wide angle shot, so the dimensions look a bit distorted…)

The bar has been equipped with the cargo securing system that I will put in throughout the boat: Very strong elastic ribbons, closed by adjustable slip locks. 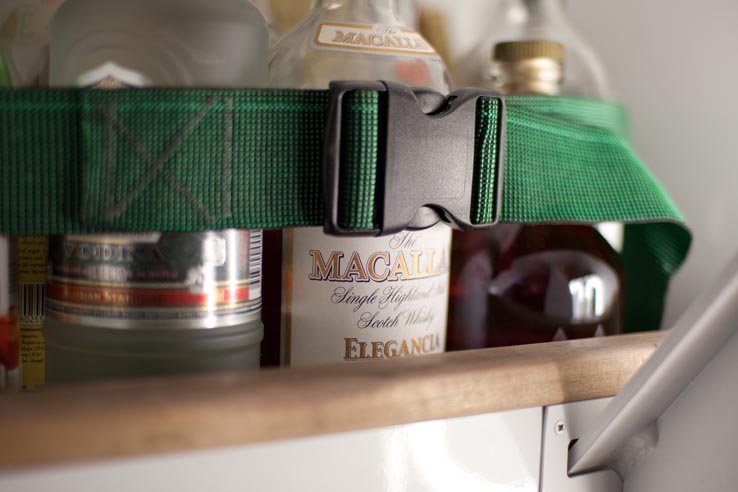 One of the most common causes of small injuries on an ocean crossing yacht is crew members slipping and falling. Your typical “luxury” cruiser has nice shiny floors. Shiny, however, is not so nice when you have wet shoes and the boat is heeled.

The Journeyman 60 has a high tech floor material made for public swimming pool areas. It is very durable, easy to clean and actually has exactly the same friction when wet as when dry. In combination with well placed grab-rails this should minimize falling accidents.

Another safety aspect of the floors is what happens if the boat experiences a knock-down. On your average cruiser yacht the floor panels are held in place by gravity, and people tend to store all sorts of heavy things underneath. Sometimes even potential murder weapons such as wine or spirit bottles. When the boat turns over, all this stuff falls out and frequently hurt people.

So the Journeyman 60 floor panels are held in place by locks. I use a very nice low profile Southco latch that comes with a separate key: 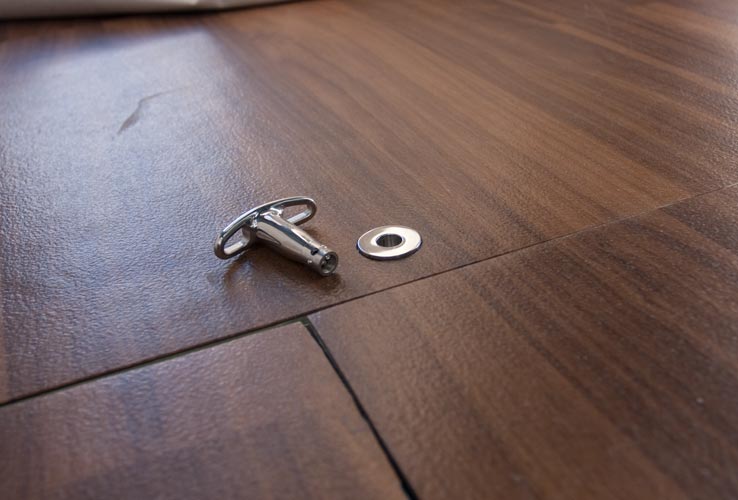 During my previous ocean cruise I lost my VHF radio microphone. It was supposed to be waterproof, but its mount was quite flimsy and didn’t hold i well, so it would tend to fall down when there was some violent wave or wash-over. Which usually meant it fell down into water. So after a few months it died. Now I consider the VHF a very important security measure on an ocean going yacht. You meet a lot of big ships out there, and it’s nice to talk to the officer on-duty and know that he is aware of you and will yield the way. Especially at night.

The Journeyman radio came with the same flimsy mount as the previous one. So I rebuilt it in solid aluminum with a bit better hold. Now the mic sits really secure underneath a seat and will not fall down easily. 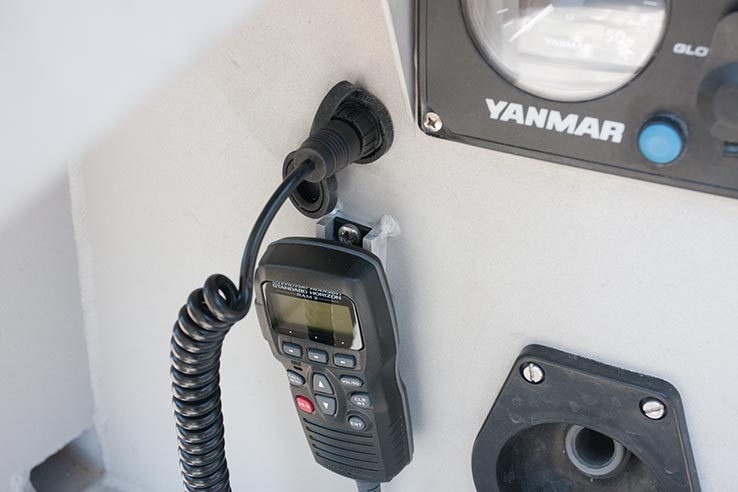 This radio also does a really neat trick: It has an AIS receiver and plotter built in, and it can display the targets on the microphone display! To me this is one of the most significant equipment advances in the last 10 years… It means that a helmsman who is alone on watch can just pick up the radio mic, and have instant access to name, course and CPA to any large ship in the vicinity. Previously this involved going on autopilot, opening the hatch to go inside to the navstation, waiting for the radar to warm up 2 minutes, doing a radar plot and then going back out to call the ship if the CPA was too small. So instead of 6-7 minutes it is now less than 5 seconds.

We just put the lifelines in, and in the middle of all delays and small setbacks they are making me very happy. Everything fit perfectly, and the welding work on the pull-pit is absolutely superb. 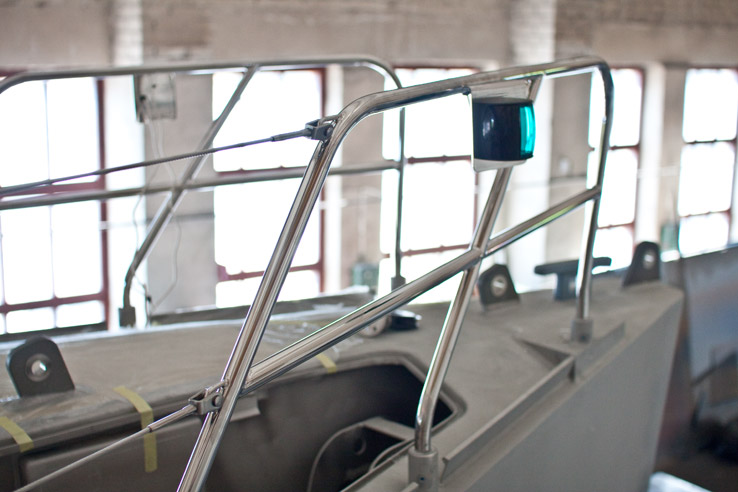 This image also shows the chainplates for the stay-sail, solent and code zero (actually I will have more of a code 2 for those who are picky with these things). The stainless pull-pit and stanchions are fitted in the deck bases using galvanic insulators made from Delrin.