I am continuing my quest to make a boat that “takes care of the crew instead of having the crew take care of the boat”. Unfortunately I can’t make the boat do the dishes. But I can at least try to improve the situation a bit for the crew member who does them. Most yachts I’ve seen are equipped with a dish rack, but it usually sits on the sink top and takes up valuable space, and the dripping dishes makes everything wet.

So I will try to put the dish rack on the wall above the sink. This space was unused anyway. So I liberate some valuable working space. And it doesn’t have to be stowed away when not in use. Plus now the water will just drip into the sink. 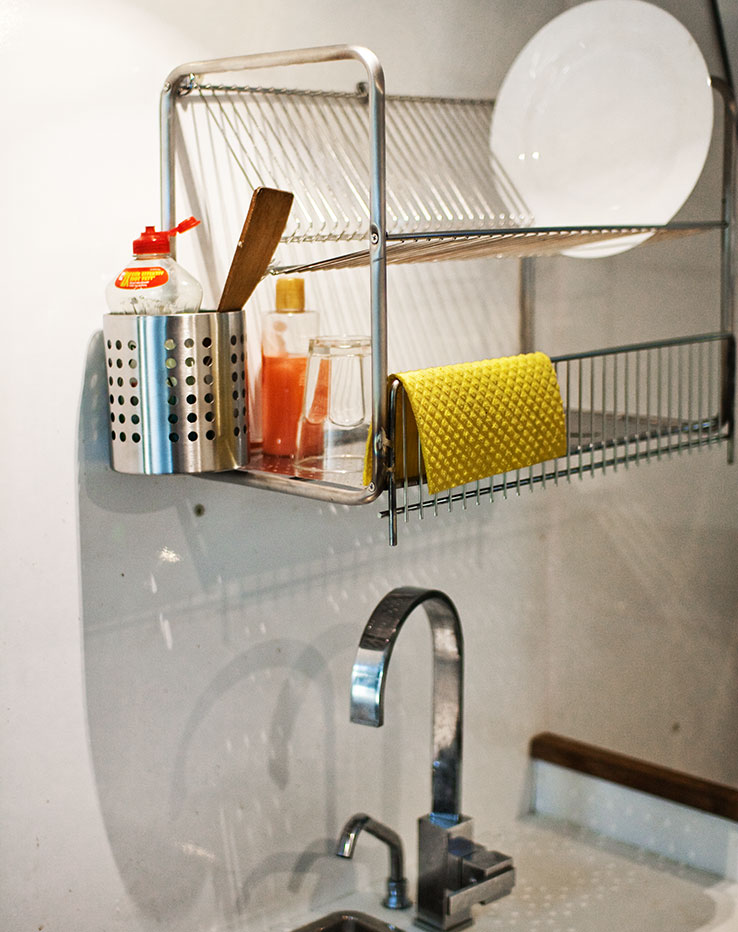 All long distance cruisers know that you need to store vegetables high and dry with lots of air circulation. Everyone I know uses a piece of netting that forms a hammock in the salon ceiling for this. Now being the stubborn designer I am I naturally had to try to improve a little bit on this too. There are two issues: The commonly available netting has way too large holes, letting a lot of smaller pieces fall through. And having only one net forces all the different types of vegetables to share the same bed, which is not always a good idea. Try storing apples next to bananas and see how long the bananas last, for example…

So I decided to use the empty shelf on top of the ballast tanks for this. This space is not very useful for anything else anyway. After a lot of stubborn searching I finally found a nice net with 4mm holes, which is a lot better than 30mm… From this net I sewed 6 separate boxes, 3 for each side. I also needed to make sure the nets staid in the air even when loaded with vegetables, so I sewed some small battens into the bottom of the boxes to make sure they didn’t collapse. So now I have lots of space, no garbage falling out, and 6 divided compartments. Good. 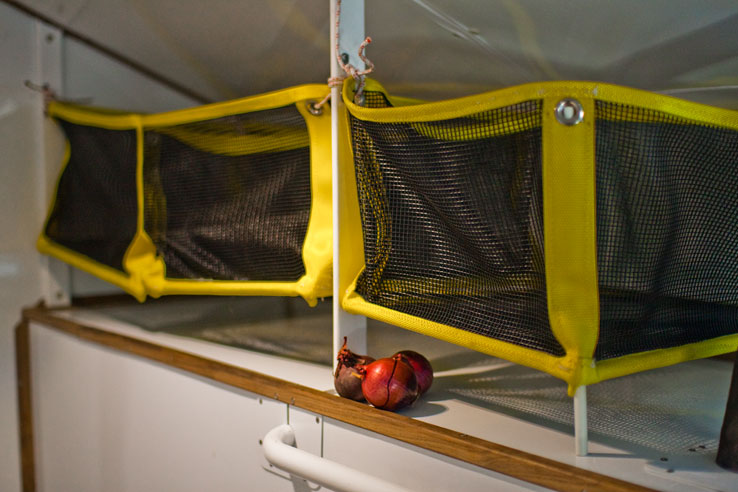 The mornings are getting lighter, and we are doing the seasons first sailing this coming weekend. This prompted installation of the window blinds.

On long ocean crossings a lot of the sleeping will happen during daylight, so good window blinds are actually essential for comfort. 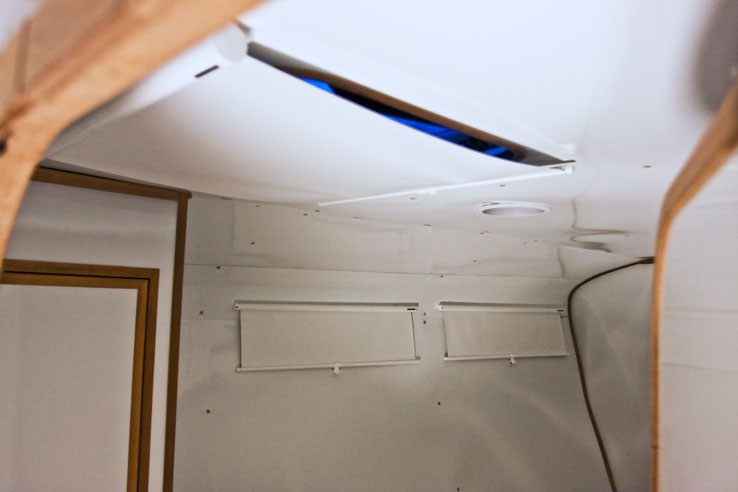 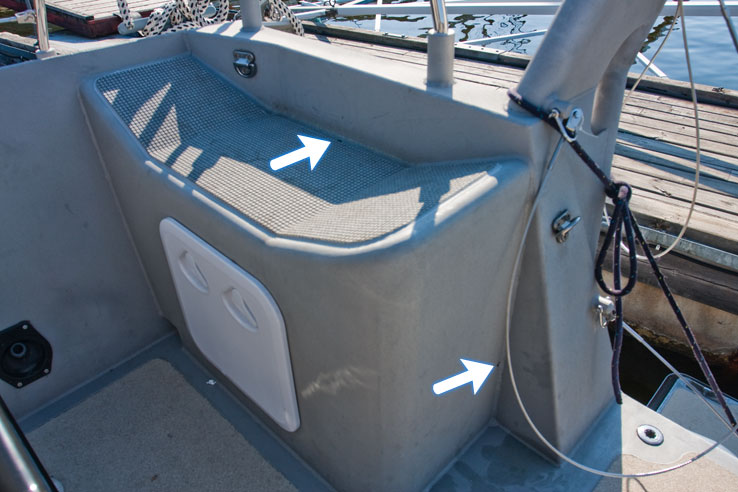 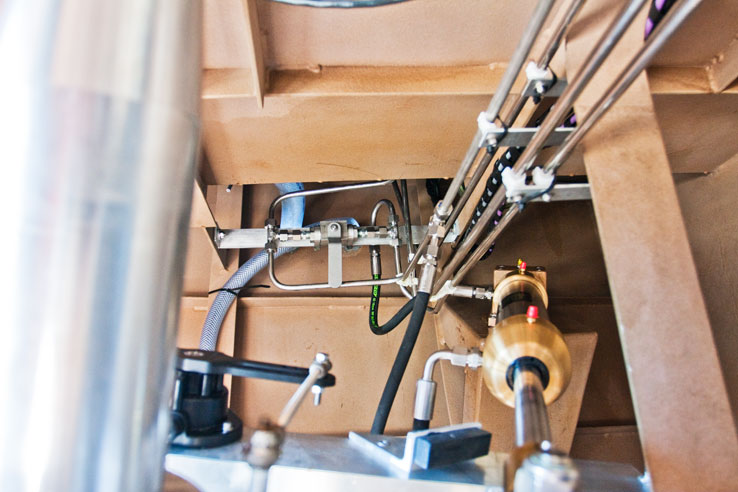 It seems the closer we get to sailing season and the closer Journeyman get to completion the higher the interest from people in joining the sailing activities. Which is nice. But with lots of people comes lots of food making and eating, which produces lots of crumbs!

Crumb fighting with a cloth is not so efficient, so I decided to put in a small battery operated vacuum cleaner. Of course it gets a safety belt just like all other stuff that could potentially fall down. 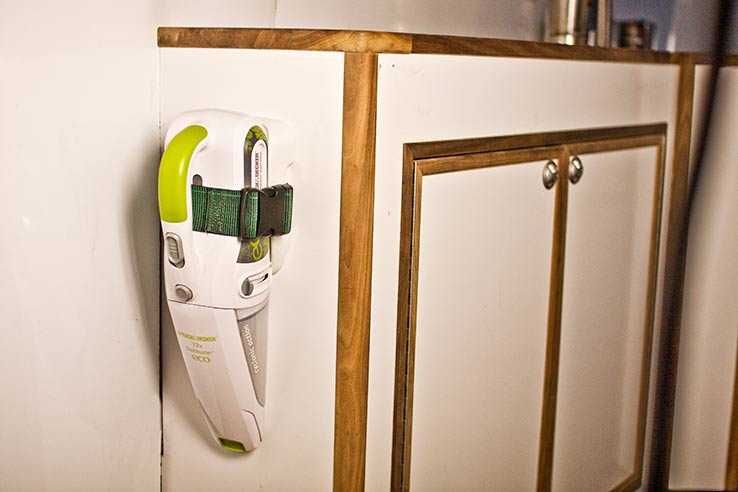