It’s not obvious yet, but yes, we are actually building a sailboat here… The rigging is already mostly done, and waiting at Marstrom in Västervik. But we need sails too… Selecting the sail type, material and who is to make them is a rather tough decision. There are many materials and makers around, and none is perfect. After all, large sails are heavy, expensive and tend to break frequently.

So basically what you end up trying to do is to minimize all those negative points at the same time, which is not possible. Lighter sails break easier and are more expensive. Cheaper sails last shorter and have less good performance. and so on… Also different maker have different approaches to how repairs are made and what type of service level they provide.

So I have been going through a process which has involved some of the worlds largest sail makers as well as some really small ones. And I have looked both at high tech custom load path string sails, and more traditional paneled sails. The string sails have come a long way, and the big guys such as North Sails and Doyle all swear that they are much much better now than they were 10 years ago, when delamination was a frequent problem. However all the big guys also like to point out examples of where their competitors sails have failed! So obviously all of them still do fail.  After lots of thought I decided that since the Journeyman will spend lots of time away from any possible point of repair, I did not want to take the risks involved with string sails.

I must say I had several good candidates in the final selection of which maker to select. In the end the commitment and enthusiasm for the project shown by one of the smaller suppliers got them the job. 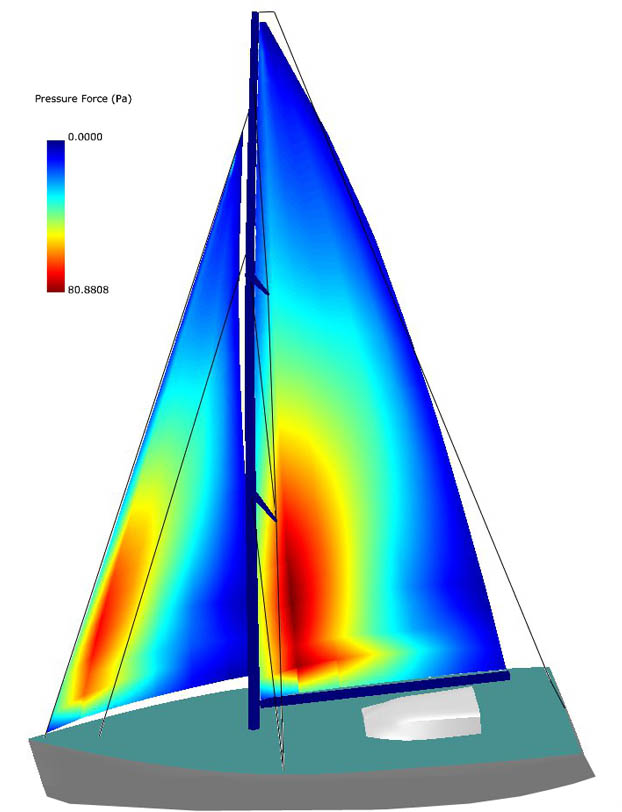 This image is just an initial sketch from the designer software, but I post it anyway because it shows a few interesting points. The mast as you can see has only two spreaders, despite being 28 meters tall. The large mainsail (overlapping the aft stay) is made necessary by the extreme shape of the underwater hull. Since the keel is so far back the center of the sailplane also has to move backwards. You can also see the two permanent fore-stays. The Code sail and the storm jib will be flown from removable stays. All fore-sails are furling.