I have previously written about my attempts to create a very energy efficient fridge and freezer. The idea was to integrate the hull as a heat exchanger in the compressor/evaporator circuit. I had some initial discussions with a cooling technician about this. However he was not very happy when he saw the actual installation.

The pipes were too high diameter, and the vertical distance between the compressor and the heat exchanger was too big. We decided to try doing it anyway, but adding some extra oil into the system to compensate for the large gas volume in the pipes. But in the end it was not really working very well. And the extra oil was causing problem with temporary clogging in the capillary pipes.

So I had to face up to the fact that the idea was good but the execution of it was not good enough. Very well, that is a lesson learned about how to do it for the next yacht. For this one, I had to replace the installation with a working one.

The next better choice was to have water cooled compressors with a circulation pump. This draws about 12W more than my original concept, but it is a standard product that works and is easy to install. So we replaced the old system with this one. In the image below we’re halfway through the install, you see one old compressor and one new. 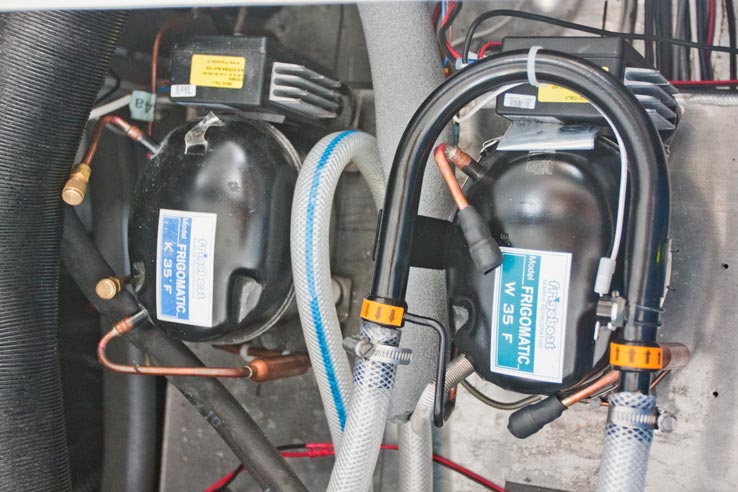 I looked at a lot of commercially available electric power monitors, and none of them really suited me. Either they didn’t support dual voltages, or they had too small measurement shunts that couldn’t handle the 200A loads I have as worst case.

Or they were of the “over computerized” type who insists on providing some kind of useless (as in “never accurate”) tank meter for the battery.

So I put together my own monitor that gives me enough info to roughly know the system state, given that I also know the parameters a “tank meter” doesn’t. Like the weather, for example. So in the image below, given that it is a cloudy morning at about 9h00, the charge rate of 6.7A is quite nice… 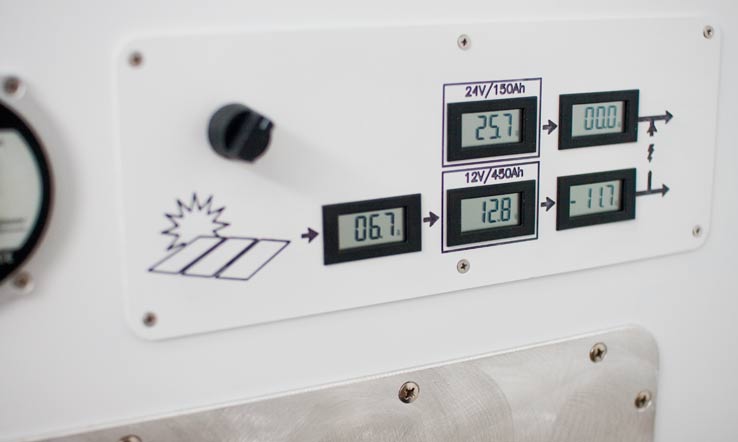 If you’ve been following this blog you know that I am close to over zealous when it comes to power consumption. I just ran a test. 18 interior lamps lit at dimmed comfort levels. Running lights on. Main computer and all navigation instruments running. Stereo on and playing music. VHF and AIS radio on standby. Total power consumption was 6.4 A at 12V equal to about 77 watts. Not bad!

The solar battery is in place, all 800 Watts of it: 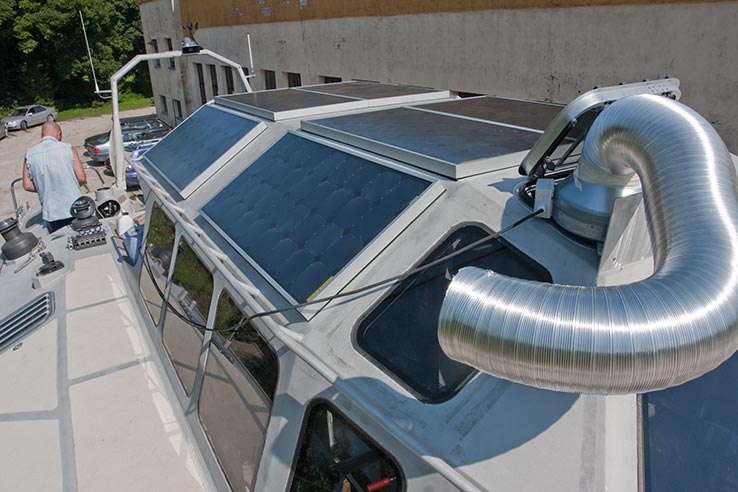 In other news, we have a heatwave situation. The boat becomes a sauna at around 10.30 in the mornings. And it looks like it will last. So starting today we will be switching to working nights and resting during days. So the workday starts at 20.00 and ends 08.00.