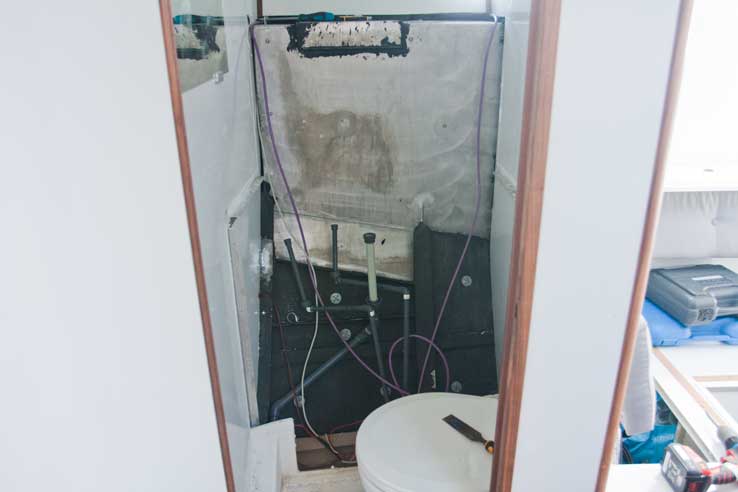 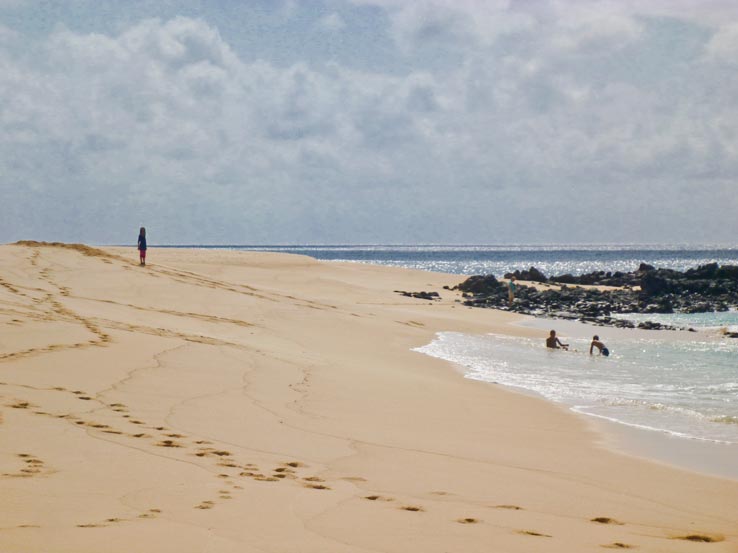 After a crossing that took much too long we are now on Ascension Island. Remind me never to fail to take ocean currents into account again ;-)

This place has less than 1000 inhabitants, and life centers around the big Air Force base which is jointly operated by the UK and the US. It used to be a large hub for transatlantic cables, but it has been routed around a bit lately so that importance is diminishing. It does not really have a harbour, only a large pier that extends far enough for shallow draft boats to land goods and people. The anchorage is good but a bit windy.

Last night I went with the crew to the beach just north of our anchorage. We are in the nesting season for the big green turtles. These animals grow to 250 kg and live for up to 300 years. They come here to mate and lay their eggs in the sand dunes every year. One had just crawled up across the beach and was busy digging her hole to hatch her eggs. We stood silently in the dark and watched her work from about 3 meters distance. 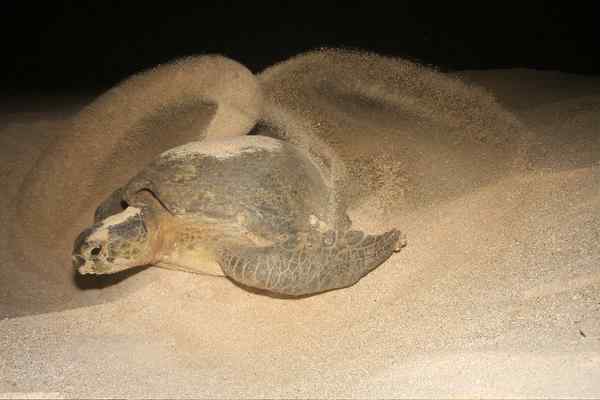 For me, this experience stood in stark contrast to the last few days of work. There has been a little too much trouble recently for my taste. That there is a constant flow of maintenance tasks on a cruising yacht is something all sailors know. But destiny has not exactly been smiling on the Journeyman the last months. At the same time that a lot of the purchased equipment (Bow thruster, toilet, stove, etc) wants to break down, we had a collision that wrecked a rudder, and now the ballast tanks are acting up.

We did have a ballast tank leak on the first leg of the journey, back in September. That was fixed and things have been OK up until this last leg when a new leak appeared in the other tank. I fixed that leak, after some swearing over the yard workers in Estonia who had very clear instructions to make sure everything in the interior was possible to take apart. And still they glued things together so that I had to saw it to pieces to get it open…

But now it didn’t take very long now for two more leaks to appear, one in each tank. And since I had the interior panels removed now, I suddenly saw what was happening. The welds that are cracking are single side welds, they are quite weak. The sloshing of water inside the tanks as we are sailing makes the tank plates move a little bit with it. This movement is causing the weak welds to crack.

Now fixing this problem is not rocket science at all, but it’s a big operation that will take a few days and requires a fair bit of welding work. I wanted to see if we could get it done here on the island, and were told by the port officials that the only chance to find a welder would be on one of the air force bases.

I started to walk towards the airfield, hoping to hitch a ride along the way since it was quite far. I was happy when the first car that I hailed stopped, and the guy driving it was a long timer on the island who knew most people. He took me straight to the welding people on both the US Air Force and the RAF bases, but none of them were able to offer any assistance. Their equipment is not portable, and they can’t leave work to spend 3-4 days on a private yacht anyway. Plus material availability would likely be a problem. 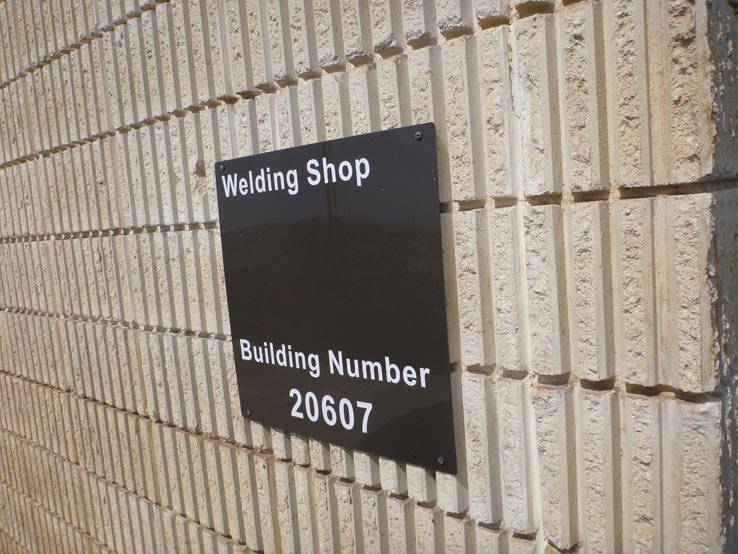 A fun observation on the way was that the extreme remoteness of this island completely takes away the need for security on the bases. The fences around them are only to keep animals out. All gates are open and unwatched,with only a cattle trap in the way.

So here we are on Ascension, with a plan to sail upwind to St Helena and Capetown, with a boat that sails strong upwind really badly (without the ballast tanks). A shorter trip like this could have worked, but 4000 Nm certainly does not. So the plans will have to be changed. And the place we have downwind that could offer a better possibility to get the tanks fixed is Brazil.

So… Any reader who as advice to offer on where to go in the eastern parts of Brazil, please let me know!

The last 3 weeks have been slightly too troublesome for my taste. Progress on the final to-do list has been very slow and sometimes almost backwards… Especially since I am trying to get some sailing done every now and then.

But today I got a nice verification that at least I am not completely lost as a designer. The ballast tanks filled on the calculated time (10 minutes) and resulted in the calculated heel (8°). Nice. 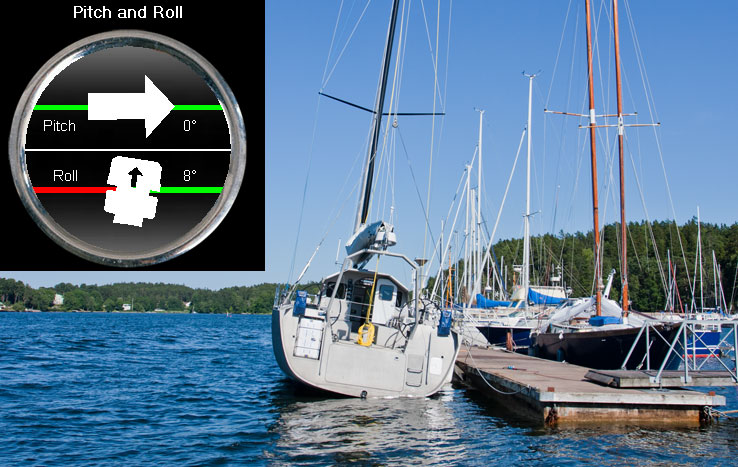 I have written once before about the Creative Pump Design Department. It got even more creative now that the pumps have been installed for real. There were lots of limitations in terms of pipe bend angles and mounting spaces, so in the end the pumps had to be mounted at really funky angles. But now everything is solid in place and all the connections for the ballast tanks are done! Actually this little project showed one of the strengths of building in aluminum: It is reasonably easy to add and adapt the structure when needed.

You can also see the heat exchanger for the fridge and freezer in the right side. 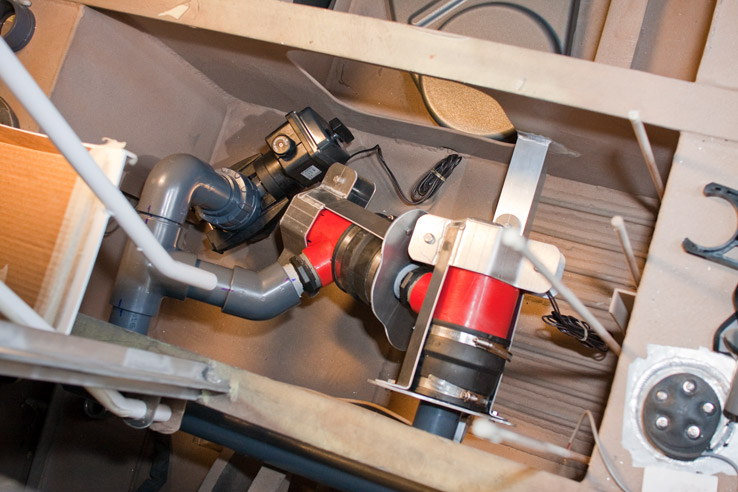