It is now too late in the season to continue the journey south. So I am forced to rest a while, waiting until next spring to continue, sometime in September.

One thing that I thought would be fun to do now that I have plenty of time is to write an entry listing some of the problems and issues I have encountered in building this first prototype Journeyman. After all, someone said one of the strengths of mankind is learning from other peoples mistakes. And I know I have a lot of yacht building fans reading this blog. In fact there are over 3 000 people reading it every month.

So. Let’s start with a couple funny design errors: It started with a hole in the bottom that I had designed. The yard workers told me one day one of the aluminum plates for the hull bottom was too short. I couldn’t understand where the error came from until I checked my original design model, and found that there was a 10×80 cm hole in the bottom in front of the keel.  The error had been in the design for over 6 months without me seeing it!

This is the hole: 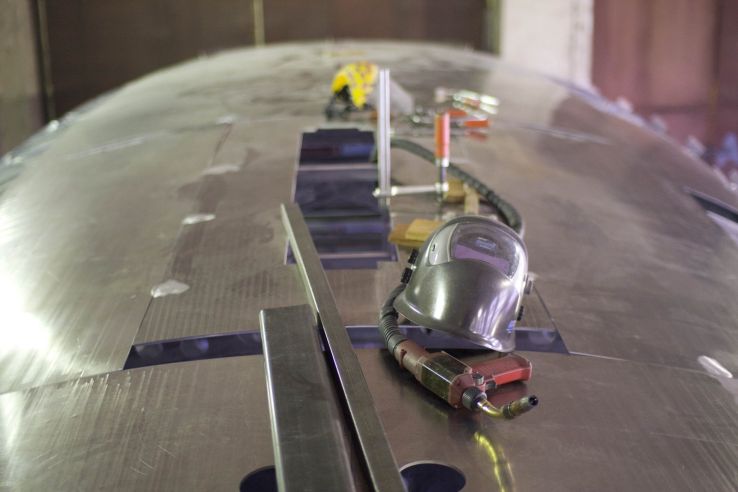 Another one is the misplaced windows in the forward toilet and showers. The windows are one frame too far aft, which puts half the window in the salon. When I discovered this it was far too late to fix without major rebuilding, so it had to stay that way. Actually very few people notice it, and as a side benefit there is more light in the salon. Anyway, both of these errors were in the original design, despite the several thousand hours I had spent looking at it. Just proves how blind a man can get.

One of the first major problems after launch was the fuel tanks. The manholes in the tank tops were sealed with a sealant that dissolved in diesel. This was of course a very bad idea. Reopening the tanks, removing the sealant and closing them again took about two weeks of completely unnecessary work. But I learned a lot about the chemical properties of various sealants. Sikaflex is not the answer to all problems, after all. There are actually very few sealants on the market that resist modern diesel.

The lifting keel sliders were a similar story. I first used standard marine products, Delrin plastic and Sikaflex glue. Bad choice. Now I have learned a lot about different kinds of plastic and what glues to use. This is a whole science in itself! About two weeks were lost here too, replacing the sliders on the keel. Plus it was pretty expensive.

The last really major design issue was the recent problem with the ballast tanks. But I have already written extensively about that, so I will just mention it here. Of course, that cost almost a month of work and a screwed up sailing schedule.

Not leak testing the hydraulic steering thoroughly enough was a small detail that cost a lot of trouble. It looked good when we put it together in the yard. But now I know that there was almost ten minor leaks in the plumbing. I lost count of how many times I re-bleed the system and filled new oil. Besides a couple of connections that weren’t tight enough, I learned that getting conical thread connections in stainless steel fully tight is difficult. But a little thread-lock glue solved that problem. Another thing that could have spared me many days work if I had done it from the start. But I must say that now that the leaks are fixed, the steering is absolutely fantastic. So precise and smooth, no play at all.

The mistake with the anchor arm taught me that aluminum is soft. I knew that before, of course. The anchor arm was not supposed to be under load while the boat is at anchor. There is a separate strong eye for that at the bow. But I didn’t think enough about the type of loads the anchor would create when being pulled up. I guess I kind of skipped over that when designing it, it was a detail after all. But one that caused some trouble and also became expensive to fix.

I seem to have chosen too narrow diameters for a few of the drains. For the anchor box and the bathroom wash basins in particular. Narrow pipes flow too slowly and clog easily. An unnecessary problem if I had known it in advance.

I am very annoyed that I made the grab-rail in the ceiling of the deck house too short. This is the only place in the long path from the cockpit to the salon where there is not good enough hold during rough sailing. The rail starts over half a meter away from the entrance door. It would have been very easy to have it start at the door instead. But I didn’t discover this until we were in rough sailing conditions for the first time, and changing it now is a much bigger operation.

At one point in the design process I was pretty bored and didn’t have enough work to keep me fully occupied. So I started to design my own lighting system. This was quite fun for a while, and I still think it will be great, eventually. But with all the other problems that come with building a prototype yacht, I am now regretting this decision. I have not had enough time to make the system work well, and all the salt water that leaked in during the first ballast tank cracking destroyed quite a few of the units in the system. So the system has been kind of limping along for the most part so far, making me wish I had settled for standard products here.

Speaking of standard products, these do cause quite a few problems too. Here are just a few:

I had trouble finding a supplier of deck hatches that was able to make double glassed hatches. I ended up buying from Houdini in England. These hatches are unfortunately shit. The double glassing works well, but the hatches are leaky and the lock and slider mechanisms are always falling apart.

I selected the Vetus dorade ventilators because of their sturdy stainless build, and the good design. I didn’t realize until they were delivered that there was a flimsy piece of plastic holding them together. Dear Vetus, what’s the point of making a ventilator in 3 mm stainless steel if it is mounted in a 2 mm plastic ring that breaks as soon as someone stumbles on it? So I had to dismount and rebuild them with carbon fiber to make them strong. Even worse, when we got out on the ocean for some rough sailing, it turns out that the dorade boxes doesn’t even work. Water flows in despite the boxes. So I have to sail with the ventilators closed all the time to be safe. I have still not figured out a solution to this problem. I might as well no have put any ventilators there at all.

Another disappointment was my Max Power VIP150 bow thruster. Its gearbox broke down completely in the Canary Islands. The supplier did ship me a replacement free of charge, but I have still not mounted it, since this requires getting the boat out of the water. The bow thruster also came with a control unit that was not waterproof, and a control panel where the rubber seals cracked after only a couple of months. Considering the price of this product I think they could have done better.

The list goes on: The wind generator falling down because of badly designed supports. The stove leaking exhausts, and the stove gimbal mount falling apart due to too weak lock washers. The toilet seats falling off because they were mounted with small plastic screws that were too weak. Many hatch locks in the interior loosing their handles because a construction fault cause them to crack inside. It appears to me you pay a premium price for all “marine” products, but they are not always worth it….

Anyways, I think this article is long enough by now. Maybe I’ll continue some other time.