Now that we are sailing, work on the boat is not as turbo hectic as it was during the building stages. But I still want to fix at least one small issue every day as long as we are in harbour. Today it was the kicker (or vang as it is called in some places). It is a really strong hydraulic cylinder (14 tons) that pulls the boom down. Now that we are on the Atlantic (where there are always waves even when the wind is very calm) we get into light wind situations  where the wave motions cause the sails to loose their pull and change the load on the kicker so that it bounces up and down on its mount. This makes a rather loud bang in the rigging, even if the motion is only 1.5 mm up and down. 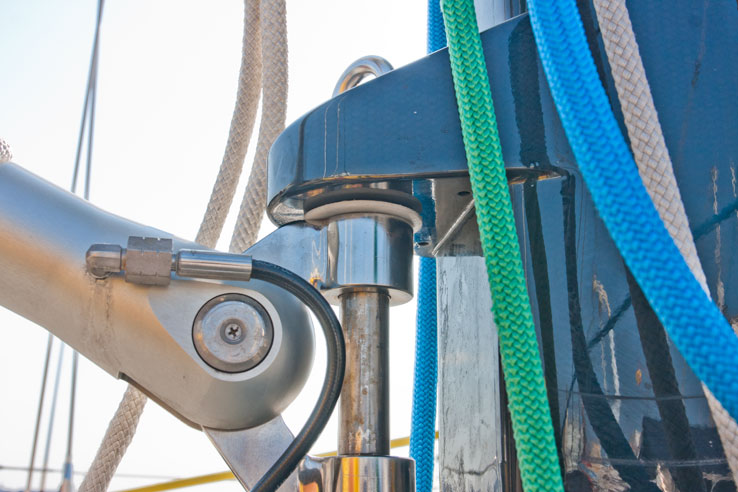 So today I made a custom washer and fitted it inside the mount so that it is absolutely fixed (The white plastic thing below the gooseneck). No more banging up and down.

The main issue with this fix was that I didn’t have a large enough (36mm) key to undo the bolt that holds the cylinder. And to purchase a key of that size I needed to find a really professional hardware store. This took two long bicycle trips out into the suburbs until it succeeded. I laughed a bit when a shop assistant in one of the places during the first trip suggested that I should go to IKEA to find it!