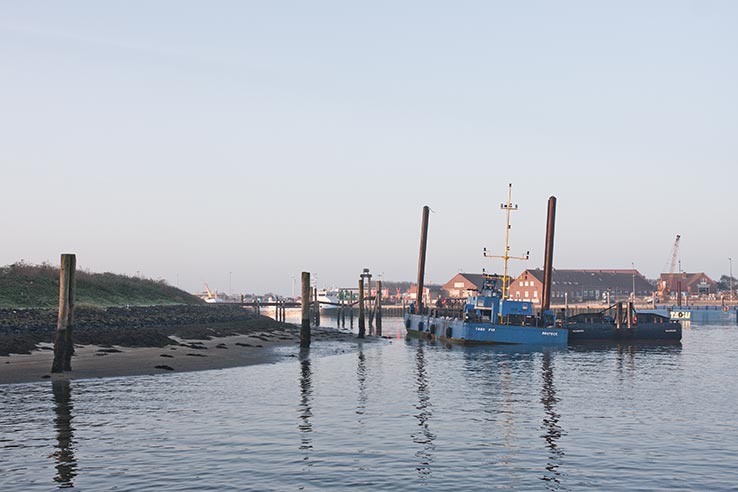 Moving around the Frisian Islands with a deep draft sailing yacht is interesting. The waters are very shallow, the tidal currents are powerful and the bottom is sand. Sand that moves around. A lot. Even this small harbour has a total of four dredgers!

So forget the charts, even if they’re recently updated. You just have to trust that the locals keep the fairway bouys moving with the fairway. Which they do. But following the bouys with less than a meter of free water under the keel, strong side current and no knowledge of what comes next is pretty testing for the nerves.

We dragged our keel and rudders a bit in the mud coming into the harbour, and once we were moored the water kept sinking, so in the end we were pretty firmly planted in the bottom mud. Not a problem, it’s soft. But as the tide rises and pulls the bulb out of the mud again rather large quantities of gas are released. Some of it flows into the Journeymans water intake, into the de-bubbelizing tank and then up through the air outlet in the salon. Creating some interesting noises and interesting smells…

Now to the human eye this water is extremely dirty. Muddy with lots of bird shit floating around on the surface. I was wondering how this would register on the Oceansearch sensors. It didn’t. Well, the hydrocarbon went up a bit, I don’t know if that’s because there is more oilspills in the harbour or just the sensor getting confused by all the mud. Oceansearch is primarily concerned with climate variables, of course, and doesn’t really care about dirt, so it’s not so strange. But it would have been fun to have some kind of optical sensor as well, just to be able to measure exactly how dirty the water is! Maybe that’s for next version.