At 5 o’clock in the morning on September 11, 2000, I arrived in St Johns, Newfoundland after a rather difficult crossing from Qaqortoq on Greenland. The following 30 hours were some of the weirdest in my life, with a complex set of personal events intermixed with the approaching hurricane Erin and the terrorist attack that took place a few hours later. I could write a very very long text about this, but what is important today is the fact that we were short of fuel.

Now St Johns is a fishing/commercial/naval harbor, with zero yacht traffic except on rare occasions. There was simply no refueling place equipped with a small enough nozzle to fit in my tank fill. And Canadian laws are very strict about environmental damage by diesel spills in the water. So they all refused to fill our tanks using a funnel.

We were moored behind a small charter trawler, whose captain (like most Newfoundlanders, I later found out) was an extremely nice and helpful guy. He called down a fuel truck, but that met with the same problem, the nozzle was to big for the small hole. After the second fuel truck who was called for had the same problem, my newfound friend got in his car, drove 30 km to his home, and came back with a large oil barrel and a manual pump. We proceeded to call one of the fuel trucks back, and had them fill the barrel on the dock. Then we pumped the fuel by hand over to our yacht.

I decided that I did not want another 9/11, so the Journeyman is equipped with dual work-boat size (50mm internal diameter) fills. Some trucks also has quite high pressure in their pumps, and will refuse to fill your tanks if the air breather outlets are not the same size (too small breather outputs cause overpressure and thus spills). So I use three breathers instead of one. Plus they all have water-locks at their hull exits. Never again… 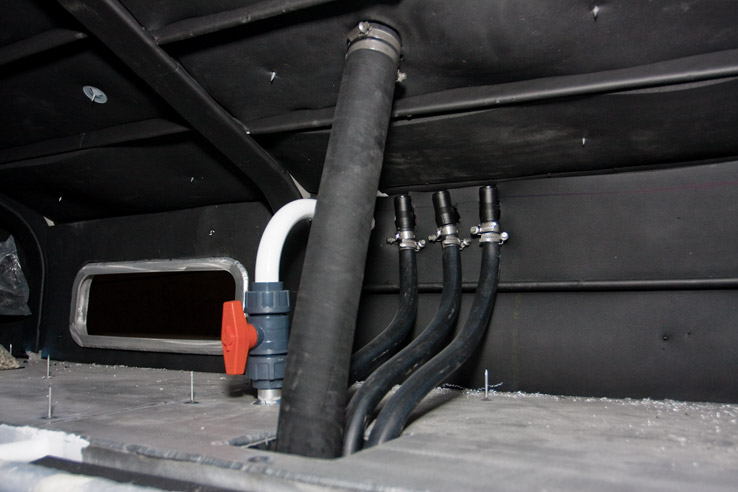 In the picture you can also see the valve for the breather pipe of the ballast tank. Why is there a valve on the breather, you ask? Because in case of an emergency I want to be able to seal the ballast tanks shut. This will give an extra 4-5 tons of buoyancy to the hull.